Timelocked is the surreal time-travel comedy you’ve been waiting for your entire life. The story began as a passion project of Emmett Crockett that grew to become the focus of his Master’s Thesis from the University of New Orleans Film Production program.

In the scene above, Terry is stopped by his coworker Tristan on his way to his boss’s office. Needing an escape, he plugs in his special time machine (which looks exactly like an old microwave) in the hopes that his future self will send him some help. 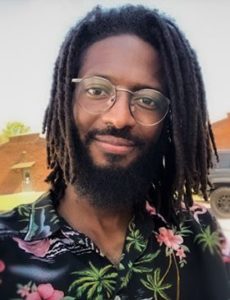 We talked to Emmett Crockett, who answered a few questions for our blog, and here’s what he said about making this movie.

“We shot most of the film in the New Orleans area in 2016 and a bit of montage work in 2017-18. One sequence was shot in the Jefferson Flea Market which was a great unique location that has sadly closed since we were there. The majority of the office sequences were shot at a local nonprofit called Propeller that provides office space to up-and-coming entrepreneurs.”

“Principle photography was six days and there were a few pick-up days where we shot stills and montage pieces after that.”

“I really enjoyed post-production on this because I was able to continue working closely with my producer, who was also the editor. Then I was able to approach friends whose work I had admired for a long time to do visual effects and compose the score. My favorite aspect of filmmaking is collaborating with other artists, so being able to keep up that collaboration and work with new people was super rewarding.”

“There is a tracking shot that shows the entire office after it has been “retrograded” (that’s the term we use for the phenomenon taking place throughout the short where people and objects transform into their historical predecessors to illustrate that the fabric of time is breaking down). I love the shot because it shows off a lot of the production design work we did and it reveals the promise of the premise. Time-travel hijinx in full effect.”

“I’ve been writing a new short inspired by the quarantine that I’m really excited about. The 1st Assistant Director of Timelocked has a company called Sweet and Spicy Filmworks that has been working with me on developing the idea and planning the shoot. My goal is for that to be the next set I step onto.”