Two thieves get more than they bargained for when looting a backwoods building. 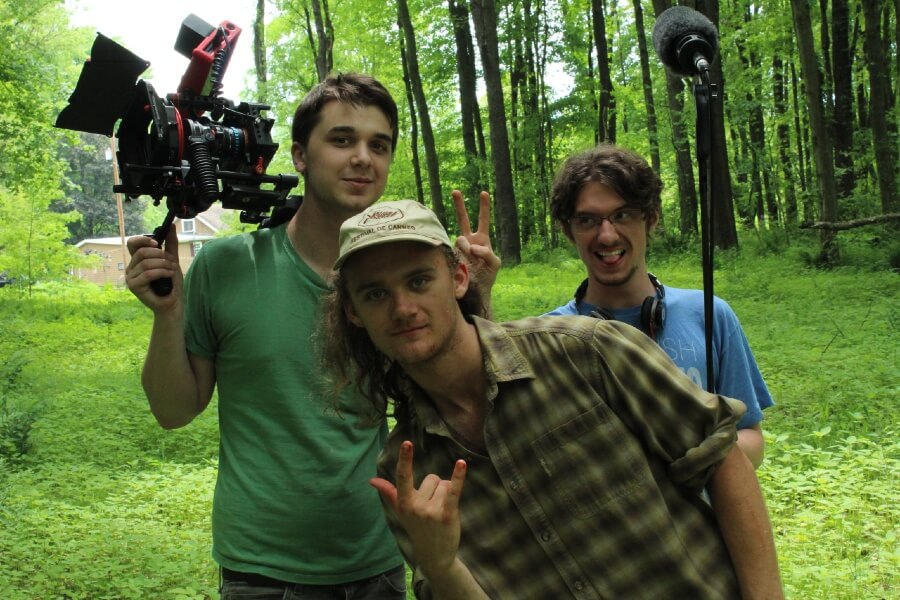 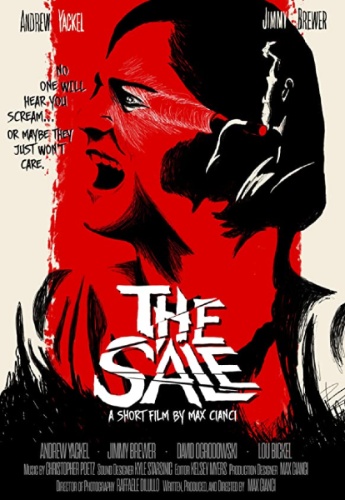 We had the pleasure to talk to Max Cianci about The Sale and he answered a few questions for our blog.

“The film was shot in Transfer, Pennsylvania. The building we shot in is an old auction house owned by my family. I come from a long line of auctioneers on my Dad’s side. My family sold horticulture, antiquities, estates, vehicles, etc. I grew up in that building going to family auctions. The house at the end is my Dad’s, not too far away from the auction location. We shot this film in 2017. It was the summer before senior year of college for us, and we all got busy with our thesis films and graduation and getting jobs, and I really let this thing sit on the back burner. But, this year kicked me into gear creatively, and I’m happy we were able to come together in post and finish strong.”

“Production was four days, plus an evening where Raffaele and I went out and picked up the small night driving stuff. My production pitch to the crew was that we’d shoot all day and then sleep over at my Dad’s place and have bonfires and hang out. Most of our crew came from Pittsburgh, and our shooting location was about an hour and a half north. We all made the best of it, creating all day and crashing on my Dad’s floor at night.” 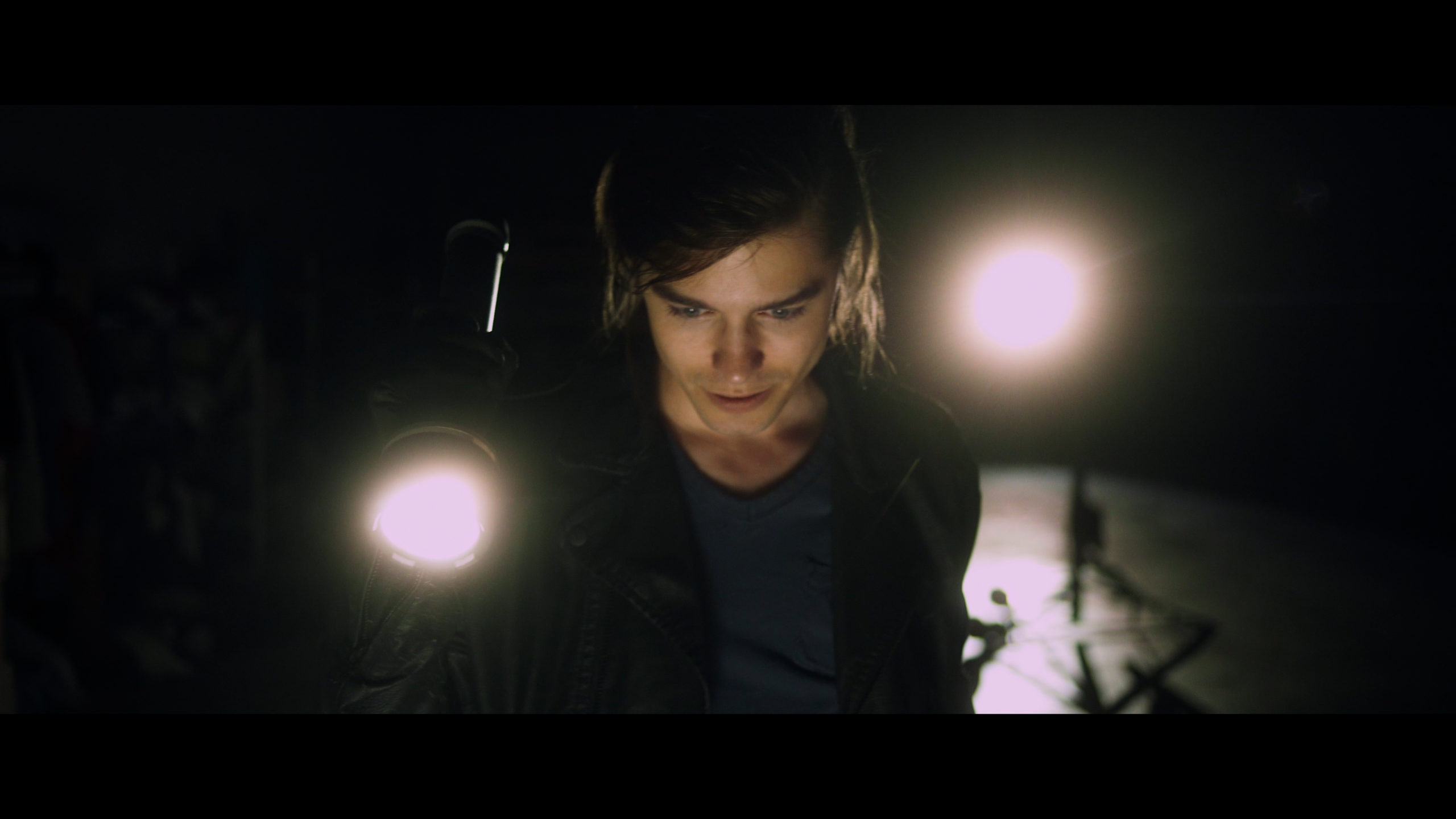 “This whole production was filled with friends, so naturally each day was full of jokes and stories. One story that I think is funny happened when we were shooting the auction scene. Someone came up to me and asked to read the script. They walked off with it for a bit, then came back. They looked at me very sincerely, and asked “Are you doing alright?” I laughed. The film handles something very heavy and disturbing, and we tried to show it in a raw, unforgiving way. A byproduct of that is ending up with a disturbing story to tell. I just enjoyed being surrounded by friends, making a film with them, and hanging out and telling stories at the end of the night. This production embodied everything I had ever wanted out of a film set. Creating with friends and having fun in the process.”

“The post-production process of this was very unique. Mostly because of the very unusual length of time that the short was stuck in post. The fall after shooting in the Summer, my incredible editor Kelsey Myers and I locked the edit. From there, I worked on sound design with our designer Kyle Starsinic. We got maybe 50% of the way done before our thesis work really picked up. This is when the project began to fall by the wayside. About a year later, I contacted the composer I had worked with on my thesis, Christopher Poetz. I remember he initially was indifferent about taking the project because it was so different from the work he had done before, but he really had impressed me when he and I worked together before, and I felt strongly that he would bring something great to it. He came on board and started writing cues. As he sent me cues throughout the process, I realized how much Chris’s music was really elevating and defining the shape of the story. His music really kept the heartbeat of this thing going throughout the long post process. Work started picking back up for me and I started traveling for jobs. Again, the project fell by the wayside. And finally, cue 2020. I was stuck at home with nothing but time. And I re-contacted the post crew members that I needed assistance from and pulled the missing pieces together. Chris suggested getting the score mastered by Monte Nickles, an extremely talented technician and artist in Montana, and that elevated the quality of the music so much. And after all that, we had a finished film on our hands. And I’m so happy we all finally have something to show for our time and work.” 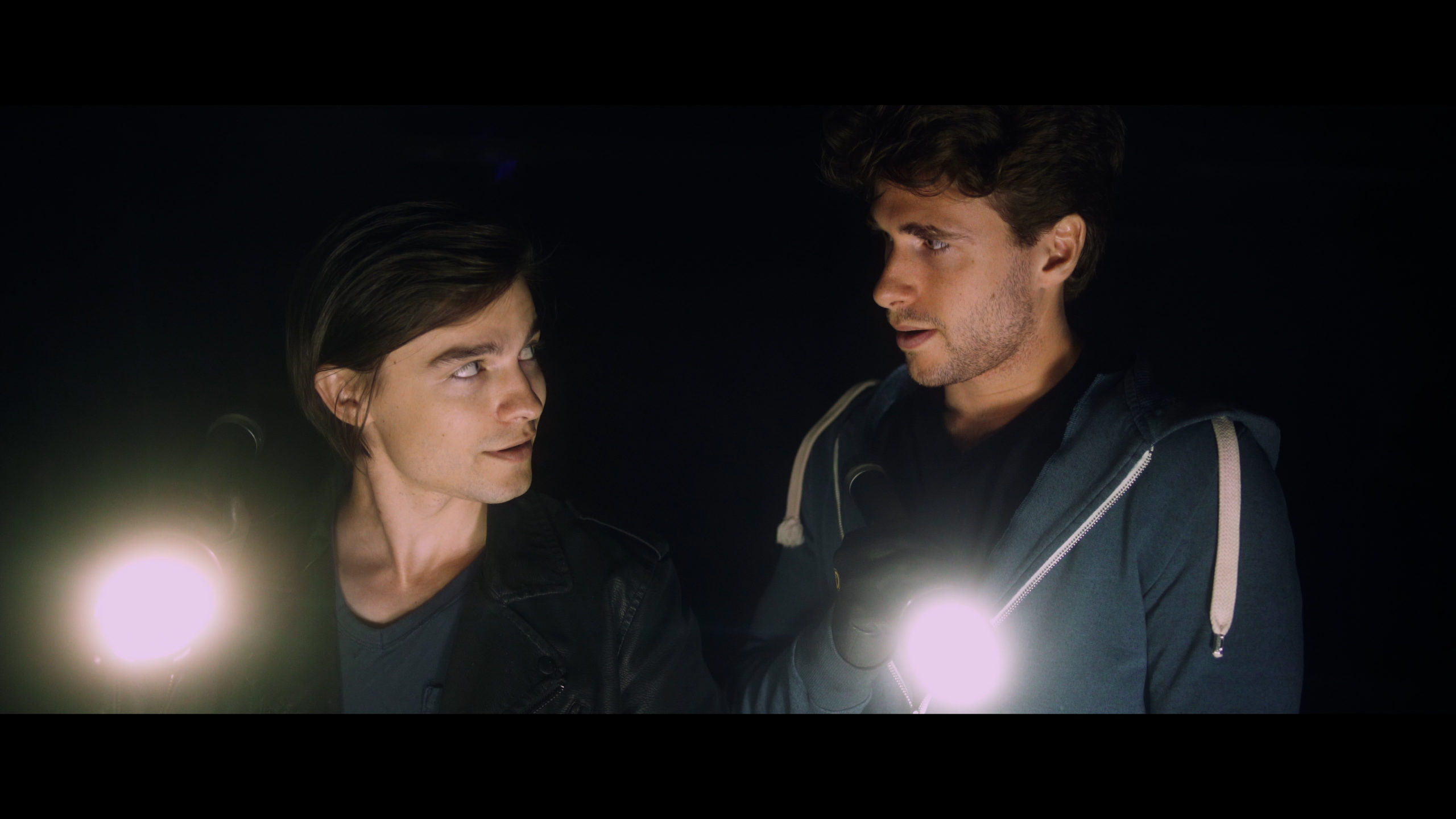 “My Director of Photography Raffaele DiLullo is one of my best friends and longest collaborators. He truly is an amazing visual artist and created so many unique and memorable frames within this project. He and I both say one of our favorite shots is the dolly forward at the end of the film towards the shed, when Pervis laughs and flicks his cigarette. We felt like it was a nice, solid move to establish such a daunting new addition to the film: where Andrew’s story comes to an end for us. I also really like the dolly when Andrew exits the woods and runs towards the house. I felt like this was a nice transition from the montage run to a new environment, by creating such a stark difference in the composition from the businesses of the woods to the openness of the home. All the subtle motivated dolly moves were fun, and I think really helped elevate the cinematography of the piece overall.”

Is the film available for viewers to watch now? 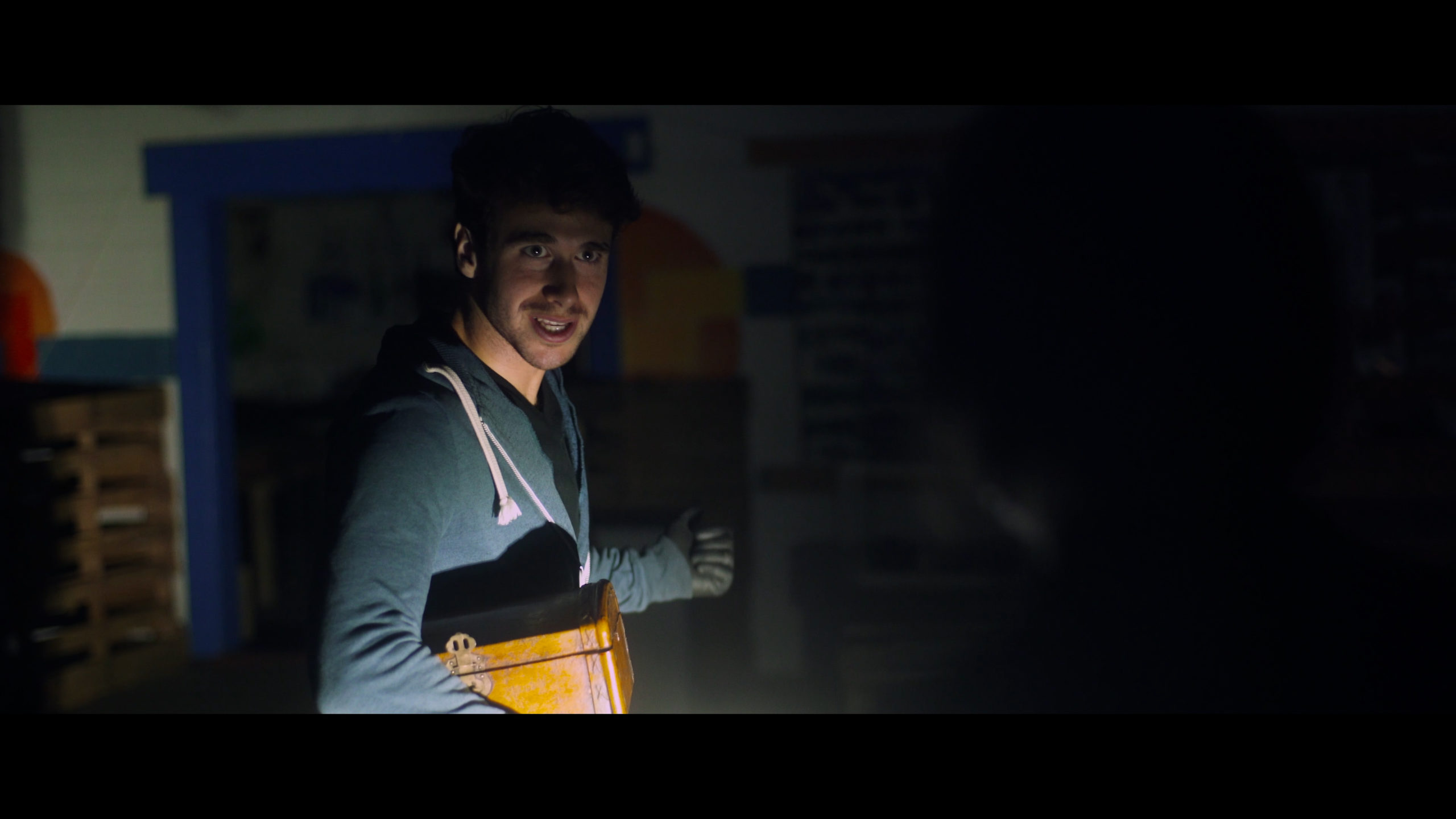 “My dream is to direct a feature film, so that’s always what I’ll be working towards. I feel passionately about telling stories that have to do with Pennsylvania, or events that have transpired here. I love this state. There’s so much unique beauty to the landscape and there’s an interesting variety to its people. I feel like there’s a lot of richness to the lives lived here. I’m excited to continue to make films with my friends, and I’m excited for the potential of the filmmakers that I work with. I know we have many more years together of making cool stuff, and that always makes me look forward to the future. I’m also in post on another short that’ll be coming out next month that I’m excited to share!

I want to also shout out our actors in this film. They really did an incredible job, and it was such a pleasure to work with each of them. I had wanted to work with Andrew Yackel and Jimmy Brewer since I had seen them in my friend’s work in school, and they always did phenomenal work. Same situation with David Ogrodowski. He’s a great actor with a real wonderful attitude and great work ethic. Lou Bickel and Justin Haggerty played our heavies Jed and Pervis, they really did great work as well. This film definitely functioned running off of fear, and if it wasn’t for the terrifying performances that our troupe of evil characters displayed, the film just wouldn’t have worked. The same goes for the incredible performances given by both Andrew and Jimmy, and experiencing our fear through their eyes, they really nailed their performances. Andrew helmed this film so well, and I can’t say enough wonderful things about working with him. He’s truly a brilliant actor and artist. I am really proud to have worked with talent of this caliber, and I learned a lot from the experience. Our background did a really nice job too. They were all local folks that responded to a casting call I put out. We had just enough people show up, and they really got into their parts. It’s always fun working with background. It was effective in establishing the disturbing new world Andrew and Eric had found themselves in.

One more thing I’d really like to say is that this thing wouldn’t have happened if it wasn’t for a bunch of people who just deeply love filmmaking and were willing to donate their time and skills to make this short happen. Filmmaking is at it’s best with a crew of people like the folks that made this short. Every time I watch this (Which I’ve got to be around my 500th time by now), I am continually amazed that these artists took the time to help make this happen, and that’s something I will never take for granted.” 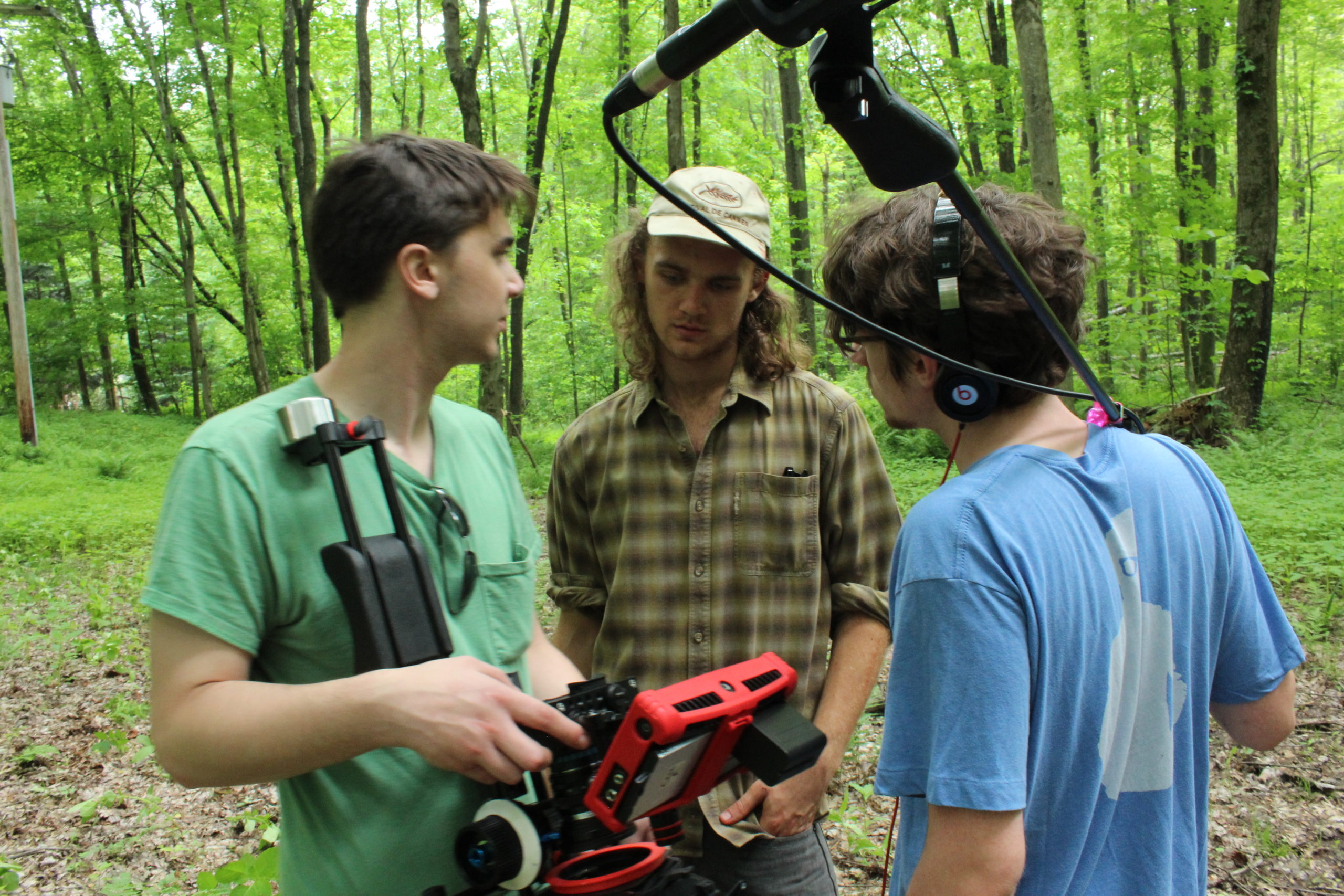 Previous Story Yeah, But Seriously Podcast Interview with Austin Highsmith
Next Story Stalked in Your Sleep: The Claustrophic Torment of ‘Hypnagogia’ by Arvid Cristina