One out of two couples say they met online. Is that true?

That’s the first of five suspicious statements in the opening scene of Phony, a movie predicated on the deceitful filmmaking tactics of a shady documentarian. The sequence ends with “One out of five of these statements is true”, a precursor letting you know that Phony doesn’t just use lying as a narrative device—it lays down in falsehoods and splashes around like a dog in summer playing with a hose on full blast.

The question Phony asks is—well, Phony doesn’t ask questions. More like, it explores the nature of online dating and consent without asking for consent. Actually, I lied (see, it’s rubbing off on me). Phony does ask a question:

How much of the person you see through a camera filter is real?

David Bush (a fictionalized version of the real-life writer and director) is a date-starved, voyeuristic filmmaker who employs his womanizing friend to help him create a film about the manufactured world of online dating. Their intentions are for social science (of course), and their plunge into an online dating documentary experiment shows them that dating online is hard—really freaking hard—unless you’re lying.

There’s a straightedge sense that this is a serious meta-documentary with social commentary on the dubious underbelly of online dating. Plus the purposeful and bluntly vocalized theme that this world innately thrives off bodily exploitation: it’s not about love–it’s about flesh, and “Phony” makes sure you see plenty of evidence.

Then there’s the cringy, awkward flipside that these protagonists might be exploiting real strangers on first dates for the sake of meeting new women—and seeing how many lies they can catch on film. The straddling of fiction and documentary is blended beautifully and the driving intrigue behind Phony is that you can’t tell what’s real and what’s scripted. Just like real-world online interactions, where finding a mate can mean someone photoshopped their eyes just to increase your chance of swiping left.

“I don’t want to seem like a creep or a weirdo or a serial killer, but the camera on the table, it is filming.”

Yes, that’s an actual quote from a scene, as fictional David Bush meets a woman at a public restaurant who has to be thinking “Dear God, where did I leave my family-sized can of Mace?” There’s an energy present at times that feels similar to the 2010 Joaquin Phoenix mockumentary I’m Still Here, as the ever-present camera gradually submerges them deeper into an illusion of what’s a sincere emotional response and what’s acting. 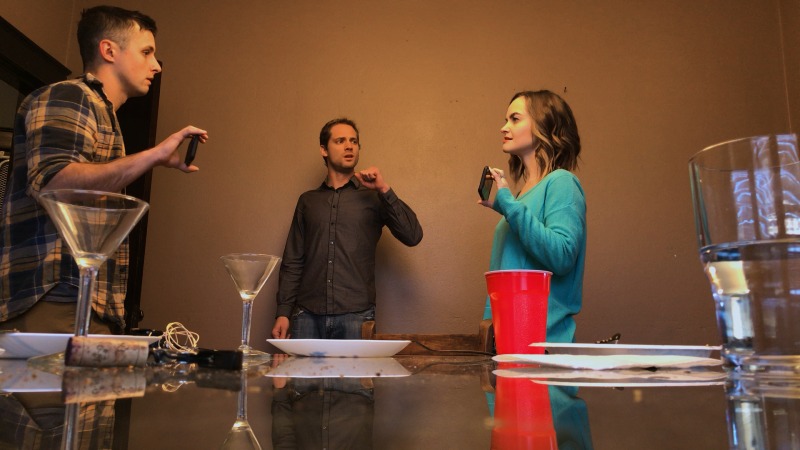 Phony was produced by Sam Claitor and Laura Cassidy with the creative team at Fable House Productions and is now available for viewing on Prime (go watch it right here!). The footage shows that yeah, you can create a pretty compelling film with just the frenetic lens of an iPhone 7 (editing by Josh Carley and cinematography by Matt S. Bell–both mainstays in the “Hollywood South” film scene).

The next time you’re on a date and it’s not going so well, you can encourage yourself with a simple thought—at least I’m not embedded in a meta-documentary with a filmmaker across the room recording every word…

Details:
A cocktail reception is included with the ticket and starts at 5:30 pm. Screening begins at 7:00 pm, and a Q&A with the director and cast will follow. Get your ticket here and use the discount code LAFilm !

Previous Story Mailer Daemon: A Short Film by John Mudge
Next Story 'Bakemono' by Sumire Takamatsu and Jorge Lucas Reminds Us It's Never a Good Idea to Feed the Evil Spirits