Sometimes when your child won’t eat, lightly terrorizing them with warnings of evil springtime bakemono spirits is the way to go. Unless your child sympathizes with the hungry bakemono and prays for a midnight visit. Then you just have to worry about how to get the demon out.

Bakemono is a short horror film co-written and -directed by Sumire Takamatsu and Jorge Lucas. Sumire and Jorge are writers, directors, and collaborators who met through their shared background working at Blue Sky Studios (Ice Age, Rio). Sumire and Jorge have each individually won multiple short film awards and combined their storytelling talents to create something both beautiful and haunting out of a story from Sumire’s childhood. 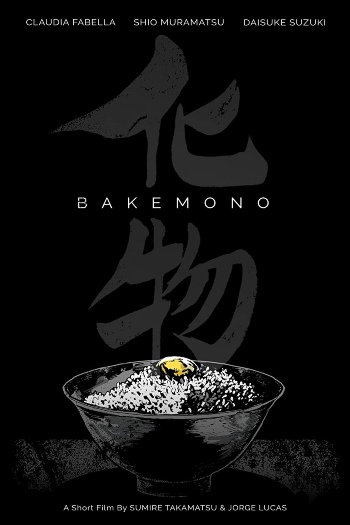 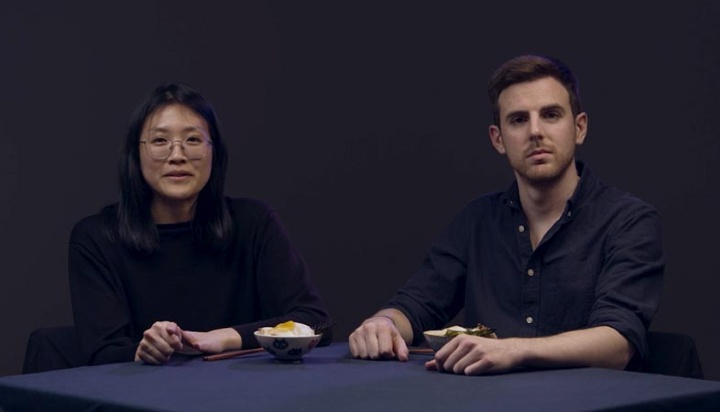 Bakemono premiered on the ALTER horror Youtube channel through D.I.Y. or Die Productions in August of 2021 and quickly garnered over 1.6 million views. It has since won multiple “best horror” awards at festivals and Bakemono (watch it here) leaves you feeling more terrified in ten minutes than many films do in ninety.

Sumire and Jorge spoke with Fable House about the production of Bakemono and how a collaboration with such a talented cast and crew came to fruition.

Sumire: “Originally from the East Coast, Jorge and I were living in the suburbs of New York at the time Bakemono materialized. This was pre-Covid, at the end of March 2019. Since the short takes place mostly in a dining room, we scoured Airbnb for the perfect house. It was in Nyack, which was convenient for our cast and crew who were mostly from New York City. The owner of the house was super sweet and was already interested in films, so she understood the filming process. She was responsive to us booking the house a month later for quick reshoots. We truly got lucky with the location! “

Jorge: “We shot over a three-day weekend, one scene per day. Huge props to our cast and crew for making such a crazy schedule work and filming right down to the last second. And then, like with every film, we got into editorial and discovered we needed more. So we managed to get back to our location for a couple more hours of shooting with our lead actress, Claudia. We also shot some VFX plates at our DP Rob Silcox‘s studio in Brooklyn, Young & Grumpy Studios“ 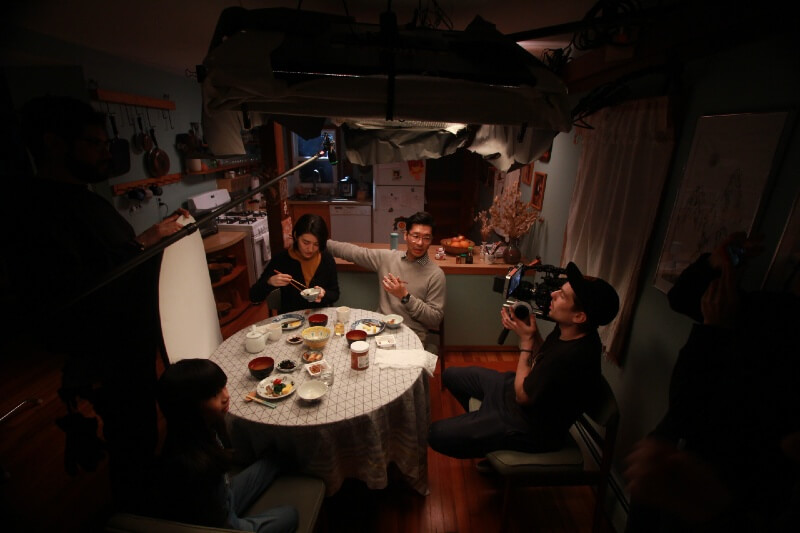 Sumire: “At first I was particular about casting Ayumi with someone of Japanese descent. We were looking through all the actor databases we could find, and I posted fliers in Japanese grocery stores in hopes that someone with acting experience would reach out. We heard back from a handful of actors and their parents, and rented an audition room to meet them. As the day went on, we were getting nervous as it was tricky to audition with kids. But when Claudia walked in the room, we knew she would be perfect. Even though she wasn’t Japanese, she memorized some words in Japanese and turned out to be a superstar in our short.”

Jorge: “When working with so much heavy equipment and moving around furniture, something is bound to break. That was my biggest fear with the beautiful home we were filming in. But fortunately we had an amazing key grip in Nate Mitchell, who’s a construction whiz. There were some, let’s call them “blemishes”, on the hardwood floor, and Nate taught us to rub walnuts into the floor to restain it to the right color. A relief and an educational moment all in one!“ 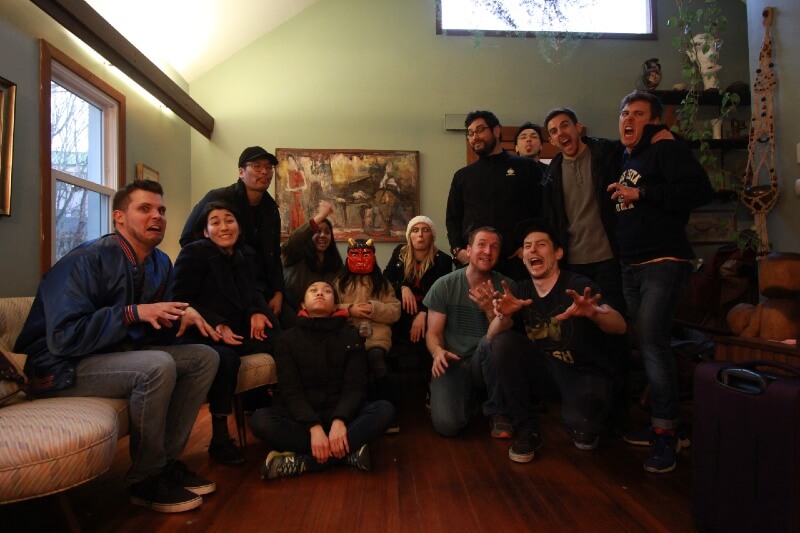 Jorge: “Sumire and I were working at Blue Sky Studios, the studio behind the Ice Age and Rio films. That job connected us with many amazing artists that we turned to for help, including: VFX and compositing artists from Blue Sky and Framestore; a colorist from Company 3, Brett Price; and, believe it or not, SFX editors and mixers from the legendary Skywalker Sound! I had to live at Skywalker Ranch for a month while finishing the Will Smith-starring Spies in Disguise, during which I got to watch them work on Bakemono too. A dream come true!”

Sumire: “We knew the score would be crucial in amplifying the story, but we both had little experience with composition. We were introduced to Emi Nishida through a friend who worked at Berklee College of Music in Boston, and we loved her work. What’s funny is that Emi told us that she didn’t like horror, and she was covering her eyes at the scary parts while she was composing. Regardless, Emi understood the assignment. The strings perfectly capture the creepiness we wanted in Bakemono. We spent weeknights in the basement of our editor, producer, and friend Billy Nawrocki who brought everything together. His efficiency and expertise in editing really helped shape the short quickly. He had brought his Mac to the shoot, and was editing on set, which helped to inform what alt takes to get as backups. Billy played such a crucial role right from the beginning when Jorge and I had the script, and we’re forever grateful for his friendship and stellar editing skillz.”

Sumire: “(SPOILER ALERT) My favorite shot is of Ayumi dissipating into smoke after Okasan throws the beans at her. Krystle Feher, our makeup artist whipped up an amazing look for the Bakemono with prosthetics and veins painted on Claudia’s arms. Then our friend and VFX artist, Alex Frenklakh crafted the smoke effects in post. I personally love visual effects in filmmaking, and being part of this process was really a dream come true. To integrate Claudia into the smoke simulation, we met up at Starbucks so Alex could scan Claudia’s face. For such a quick shot, it takes so much craftsmanship and planning to execute, making it one of my favorite shots.”

Jorge: “It’s an obvious choice, but I’ve got to go with the tablecloth reveal of the Bakemono. We were excited about it when we conceived the idea, but on set we discovered that the tablecloth was too heavy for Claudia to whip by herself. So we had two people just out of frame lifting up the corners for her. And we also toiled over doing it in one shot, with Sherry, our monster, crouching down and popping up at the right moment. But in the end, our editor Billy ended up stitching two takes together anyway! Nonetheless, the shot still gives me goosebumps.“ 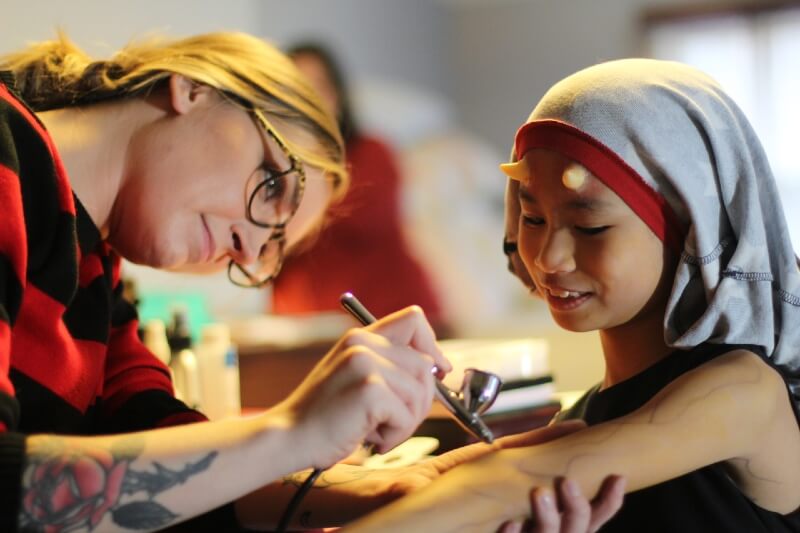 Is the film available for viewers to watch now?

Sumire: “Yes! Huge thanks to Alter for having Bakemono premiere online on their YouTube channel.“

Jorge: “We were incredibly proud of Bakemono’s first two festivals being Telluride Horror Show and Brooklyn Horror Fest. They were fantastic experiences, and still in-person at the time. We were also lucky to win a bunch of awards:

Jorge: “I have a few feature scripts written for a thriller, a drama, and even a feature-length version of Bakemono! It goes in a very different, very cool direction than the short. Until we can figure out funding for those, we have a couple shorts in the works, including one that we shot during the coronavirus lockdown of 2020. It’s about a killer pillow… ‘Nuff said!”

Sumire: “When Blue Sky closed down in April 2021, I thought hard about what I wanted to do next. I love animation and the production process, but wanted to be closer to live-action, so VFX was the natural next step for me. I just wrapped on The Book of Boba Fett at ILM, and was focused on absorbing the pipeline and quickly adapting to the process that goes into getting assets into shots, then shots out the door. My experience in production at Blue Sky, and even from Bakemono, helped me ramp up at ILM, and I’m excited by where this will take me in the near future. I don’t necessarily have a set career or creative goal, but I’m passionate about the filmmaking process, and collaborating with individuals from different backgrounds to create something awesome.”

Previous Story David Bush’s Phony is the Online Dating Meta-Doc that Explores the Secret Path to Happiness: Lying.
Next Story The Brooding Atmosphere of 'Samantha' is Now Available to Haunt Your Consciousness on ALTER